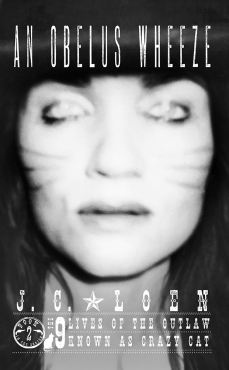 Lee has fled Chert in pursuit of the traitor Dan. She’s heading for Mexico accompanied by her guide, Snake Girl—she can’t decide which is worse: the climate or the company.

An Obelus Wheeze is a road trip on horseback—across scorching deserts and freezing mountains. The outlaw known as Crazy Cat gets to prove what she’s made of in encounters with bandits and rattlesnakes, crazy ole coots, saddle sores, and worst of all: a city.

An Obelus Wheeze is the second book in the western series The 9 Lives of the Outlaw Known as Crazy Cat. It’s a story of hardship and love, unforgiving climates, and sordid sons of bitches.

“To say I liked the lead character would be an understatement. The balance between her tough will to survive and her loyalty and gentleness to those closest to her is a joy to read and I found myself smiling, even laughing out loud, on many an occasion.” – Kenneth Wilson, Goodreads

Available from the following retailers:

3 thoughts on “An Obelus Wheeze”