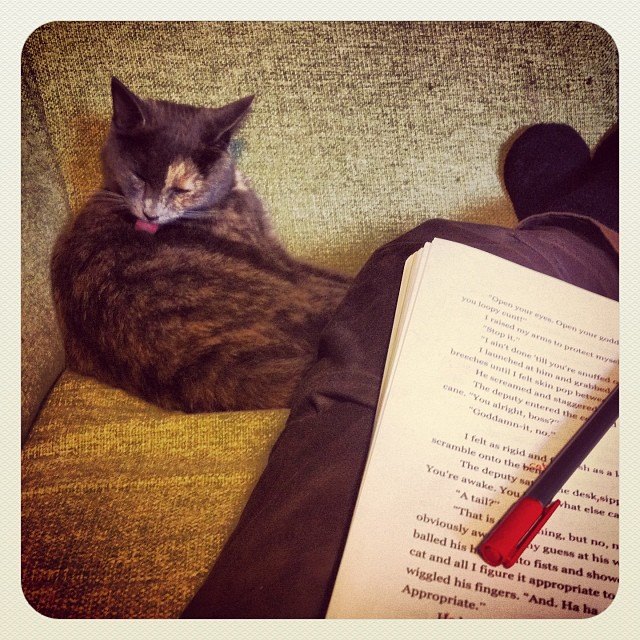 I’m currently editing my second novel: An Obelus Wheeze, the follow-up to Embers at Dawn. Before I started editing An Obelus Wheeze I completed Embers at Dawn, and then jotted down the first draft for the third book in the series The 9 Lives of the Outlaw known as Crazy Cat. I find that this method works well for me (write a draft, and then edit the forerunner). It gives me distance to what I have previously written before starting the process of editing.

Writing a first draft and editing are two very different kinds of beasts. I have realized that there is no point in even trying to write a perfect first draft – I tried it with Embers at Dawn about four years ago – it just ain’t gonna happen.

The first draft is the story in a hairball form, coughed into words by a rambling author. You will commit logical flaws, unsavoury purple prose and less than cohesive sentences. Your characters will be rag-dolls failing at the seams and with too little stuffing, exchanging halting dialogues and performing a series of mundane tasks in between the actual story (that you will later edit out). But that’s fine. That’s exactly what a first draft should be: a rabid, bastard of a beast.

It took me two first drafts of novels before I figured out that a first draft is just that: a first draft. The important thing is to get the story down. The polishing comes later. What I found out after drafting the second book, and then returning to the first book to edit it was:

I have also learned that:

A friend of mine recently finished the first draft of her debut novel. I told her time and time again to quit fiddling with the first few chapters – to get on with the damn story – but of course she didn’t listen. I wouldn’t have listened to me neither, but this is what she wrote on Twitter after finally completing the first draft: “Rewriting is so exciting! If I’d known how much it’d change and how much it would improve, I’d have jotted down the draft sooner!”

I guess that that very first of first drafts is something every author has to face alone and come out of it facepalming herself just like every other noob before her. Seems like none of that “just get it done” business makes any sense until you’ve started editing the damn thing.

What I’m trying to say here is that the first draft is a feral mongrel, as well it should be. Spawning that beast will not teach you how to write, teaching it to sit and not shit on the floor will, or in other words: editing will transform that wild puppy into a (hopefully) nicely groomed champion.

There was an error retrieving images from Instagram. An attempt will be remade in a few minutes.